You Are Here: Research Overview

The incorporation of renewable energies into a reliable energy supply represents one of the focal points of research at PGS. For example, power electronic systems are being developed to collect energy of wind turbines of a large wind farm using a direct current (DC) grid. The collected electrical energy can then be transmitted on-shore and fed with inverter stations at constant frequency and voltage into the AC transmission grid. PGS is one of the leading institutes worldwide in the development of power electronic components that play a key role in the interfaces of existing alternating current grids, as well as direct current (DC) grids. DC grids will play an increasingly important role in our future energy supply system, with respect to transmission as well as distribution of energy for dispersed power generation. PGS was leading the proposal “Future Electrical Networks” in response to the call for Forschungscampus projects by the Ministry of Education and Science of the German Federal Government. The application is for support from the Ministry for up to 15 years for research on electrical networks to make the energy reconversion policies (Energiewende) a success. Power electronic devices and conversion systems will play a key enabling role to provide a flexible, efficient and cost effective infrastructure that can support large-scale use of renewable power sources.

To this end, the development, utilization and incorporation of storage systems is another focus of work. With the increasing importance of renewable energies, the need for energy storage due to the volatility of such energy generation also increases. Short-term storage units such as batteries (whereby also automobile batteries can play a role) are used for securing the grid stability. Moreover, research also deals with long-term storage systems (gas, heat and cold) to store energy for those periods when little wind or solar energy is available. 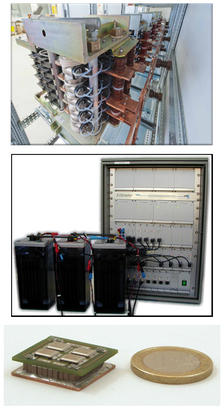