You Are Here: Equipment

PGS offers a large variety of technical equipment used for various projects that are either publicly funded or carried out in cooperation with industrial partners. For these projects, powerful computers equipped with software for simulation purposes and for the design of electrical machines and semiconductor devices are employed. Additionally, in the case of very complex and computation-intensive applications, the high-performance computer cluster of RWTH Aachen University is used to reduce simulation time. To realize practical work at PGS, various kinds of technical laboratory equipment are available such as analog and digital oscilloscopes, differential amplifiers, current probes of up to 2000 A, signal and calibration sources, logic analyzers, a high-resolution thermal camera, optical transmission data systems and power measuring devices. Automated charging and discharging test benches are used for comprehensively analyzing batteries. Furthermore, the institute owns a special measuring station for analyzing fuel cells. The possibility to characterize drives in different power classes (up to 160 kW) is given by user-specific equipment, and a fully equipped EMC test laboratory is also available. With voltages of up to 12 kV and currents of up to 5 kA, different high-power semiconductor devices can be fully characterized. There is also a test bench for the measurement of central PV inverters of up to 100 kW power available, for example, to measure the European efficiency of these converters. 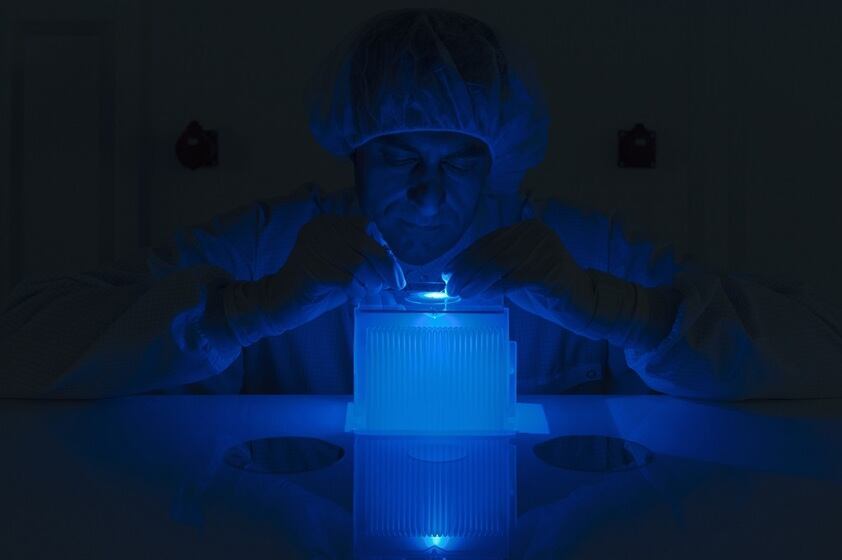 Together with two other institutes, PGS has operated a new cleanroom with a total area of 750 m2 since the end of 2003. In cooperation with the Institute of Materials in Electrical Engineering I (IWE I), PGS can perform all processes which are necessary to build power semiconductor devices.

A wet chemical wafer-cleaning laboratory, funded by the state of North Rhine-Westphalia, allows the cleaning of semiconductor wafers in megasonic baths. Moreover, wet chemical etching processes can be performed with this equipment. The lithography laboratory is used to realize microscopic structures. In addition, a new diffusion furnace in PGS from the company Centrotherm enables the performance of deep diffusions that are typical for power semiconductor devices. Two sputter machines and a vapor deposition system can be used for metallization.

Moreover, the packaging laboratory of IWE I offers the equipment for housing and contacting of semiconductor devices. The laboratory is equipped with furnaces for reflow soldering, wire bonders, and units for producing flip-chip bonded devices.

Laboratory for Converters and High-Speed Drives

Ever since market liberalization, in Europe's distributed power generation has dramatically increased. The installed power base of renewable sources has reached more than 90 GW, while more than 85 GW of decentralized combined heat and power (CHP) mini-power systems (ranging from several MWs up to 50 MW) have been taken in operation over the past decade. Most decentralized power is fed in the medium-voltage distribution grid. To support this development, high-power electronic converters, protection systems and distribution networks need to be developed.

The center has built a flexible 5 MW medium-voltage (5 kV DC) test laboratory, which supports the development of DC-to-DC converters, AC-to-DC rectifiers as well as high-speed drives (up to 15.000 rpm, 5 MW). In 2013, the erection of the test bench was completed. An FRT (fault-ride-through) test system will be installed in the near future, that is based on the FRT test capability of the 465 kW PV test bench developed at the Institute for Power Electronics and Electrical Drives (ISEA). The test bench controller is connected to the RTDS platform of the institute ACS to provide true HiL test capability with up to 5 MW DC or AC. The 5 kV DC-bus will in the future be linked to the CAMPUS DC grid that is planned between the Center for Wind Power Drives (CWD) and the PGS Lab to demonstrate, in the framework of the Forschungscampus Future Electrical Networks, medium-voltage DC technology.

The demand for highly efficient central PV inverters has risen with the increase in installed large-scale solar plants, especially in Southern Europe. On the one hand, the inverter has to feed the power which is generated by the solar plant into the mains. On the other hand, a maximum power point tracker (MPPT) always controls the output voltages and currents of the solar plant to obtain the maximum power output. For photovoltaic inverters, a very important optimization criterion is the efficiency, especially under partial load conditions (European efficiency). In many measuring projects, the 100 kW PV simulator developed at PGS has proven its worth. It provides the input power for the measured central inverter and thus emulates a solar cell field. It is possible to run measurements lasting several hours at variable input power which enables an analysis of the temperature-dependent efficiency of the inverter. Due to the success of this test bench, it will be extended this year. Modifications include the augmentation of output power to several 100 kW as well as the installation in a professional cubicle.

Matlab is used for numerical calculations. An essential advantage of Matlab is the possibility to write special functions to structure the calculation program and to provide easily usable interfaces to other programs. Additionally, Matlab offers a graphical interface that enables the generation of simulation models in an extremely short amount of time. Time demanding calculations can be programmed in C-Code and executed as "S-Functions" within Simulink models. To shorten the development time for simulation models ISEA has made available power electronics libraries for Matlab/Simulink. This includes Simulink subsystems for the XCS 2000 rapid prototyping system from AixControl.

PLECS (Piece-wise Linear Electrical Circuit Simulation) is another toolbox for Matlab/Simulink to simulate electrical circuits within Simulink, using a graphical interface. PLECS calculates the state space matrices which are solved by efficient S-functions in the discrete or continuous time domain.

PSPICE, a PC version of the simulation program SPICE (Simulation Program with Integrated Circuit Emphasis) is used at PGS to simulate electrical circuits. With a graphical user interface the electrical schematic is created and the simulation results can be made visible by software oscilloscopes.

MathCad combines the computation of numerical, symbolic and analytical calculations. Apart from this considerable advantage the calculations can be commented with formatted text. MathCad is used as an all purpose computation program, applicable from curve fitting up to complex network calculations.

Maple is used similar to MathCad. The emphasis is on analytical and symbolic calculations.

LabView allows the programming of program controls for complex test benches in a short development time by a graphical user interface. A considerable variety of hardware which can be controlled directly by LabView supports short periods of development. Therefore, developed programs can be compiled to one single software package which can be executed without LabView at every Windows PC.

PGS has a long lasting experience with VHDL, DSP and Microcontroller software development. This has started with ISEA’s DSP board with the C166 and ranges to complex time critical converter controls.

Electrical schematics can be created with EAGLE. From this schematic a PCB can easily be produced. At PGS lots of bibliotheca of electrical parts are available which can be used in the schematic. As the parts consist of the dimension solder information these parts can easily be positioned on the board.